Nogla began his YouTube channel on January 16, 2012 to post gaming commentary. Whenever he plays Gmod he usually plays as Zoidberg in which his friends make fun of his wide eyes and apprehenges hanging from his face. After they made a video of Zoidberg's death, he started playing with a model of his GTA 5 character. He didn't play as Zoidberg again until a few videos later. As of Dec. 1 2016, he started playing as a model of his YouTube icon. He owns two dogs named Joe and Tony who he loves very much.

“And as always, I hope ye enjoyed!”
—Outro 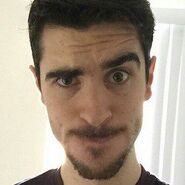 Add a photo to this gallery

Retrieved from "https://vaf.fandom.com/wiki/Daithi_De_Nogla?oldid=22817"
Community content is available under CC-BY-SA unless otherwise noted.