My name is Scotty and I make funny gaming videos! Subscribe to see the funniest moments :)

Scott, often referred to as Scotty, also known as Fourzer0seven (commonly abbreviated to "407") is a YouTuber who usually collaborates with Vanoss and his friends. His Garry's Mod model is of himself. He previously had Woody from Toy Story as his character model.

Fourzer0seven created his YouTube channel on February 21, 2012 originally under the name AlphaSquadHD. His content generally consisted of Call of Duty gameplay, but he later moved on to other games such as Battleblock Theatre and Mount Your Friends.

Scott's channel generally consists of reaction videos but also include gaming videos from time to time.

In early 2020, he and his now-wife, Chrissy, eloped. They have two cats together.

He originally lived in Orlando, Florida, however in September 2019 he moved to Denver, Colorado. 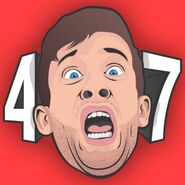 Scott's old channel icon used up until January 2019.
Add a photo to this gallery

Retrieved from "https://vaf.fandom.com/wiki/Fourzer0seven?oldid=22756"
Community content is available under CC-BY-SA unless otherwise noted.