Mini_ladd
Craig Thompson, a.k.a Mini Ladd, is a popular YouTuber and former member of the Banana Bus Squad. He's known for his gaming videos and vlogs. He currently resides in the United States.

Mini Ladd started his channel as a hobby on May 12, 2011, while at a secondary high school in Northern Ireland. While some of his early videos are privatised, he classed his first video as a Call of Duty: Modern Warfare 2 kill-streak video.

In November of 2011, iHasCupquake featured Mini Ladd on her channel, as the 'Gamer of the Week'. From this point, he continued to produce Call of Duty commentaries, as well as Minecraft commentaries.

One of his videos was a Minecraft 'skit' video of a film called 'The Journey', with Teseride. Some of his videos throughout 2012, included trolling and funny moments on Call of Duty. A video, titled '3v3 Riot Shield Battle', was one of Mini's first videos which included heavy editing. It was here where he discovered his enjoyment in editing. By February 2013, he reached 10,000 subscribers. Several videos were released by some of Mini's friends during 2013 when he was playing Call of Duty while drunk.

Craig hit 10 million views by April 10th, 2014 before he started producing 'Garry's Mod: Sandbox' videos - an original concept for YouTube videos. He reached 1.5 million subscribers on March 8th, 2015, before hitting 2 million subscribers, on July 19th, 2015. Mini hit 200+ million views in August 2015. As of 5th May of 2016 Mini Ladd dyed his hair to pink after raising more than $55,000 in a 24 hour live charity event, though sometimes he had to stop the dyeing as his hair was continuously growing. His GMod Player Models consists of him using either his GTA V Character or the giant Mario character. When the game Fortnite started rising in popularity, many of his friends had started to only play Fortnite. Mini Ladd assured his fanbase that he would not start playing Fortnite, and that he would keep playing multiple different games. One outcome of this is apparent when he did his "REACTING TO MY OWN SUBREDDIT" video, where there was a meme a user created that made fun of I AM WILDCAT, who is one of Mini Ladd's friends of permanently switching over to Fortnite.

In late-August 2018, Mini started censoring swear words out on his videos, this was so he could start being monetised often as he used to be, since YouTube only allows YouTubers to swear up to a certain point, any swearing that is heard in one of Mini's videos are replaced with the noise of a dolphin, this change has seen a mixed reaction from his fans, as most of his friends stay monetised yet don't censor their content. However, as of late September and early October, he has stopped censoring his swearing. (It doesn't sound like you're at SeaWorld whenever you watch one of his videos now.) In May 2019, he once again started censoring his videos, this time muting the swears rather than replacing them with a dolphin. However in September 2019 he stopped censoring his videos, as he claimed that it still wasn't helping his channel being monetised, though the first two minutes of his video contain swear mutes.

In September 2018, Mini created a second channel under his real name Craig Thompson, where he uploads real life videos.

In April 2015, he created a third channel titled "Mini Ladd Vault" which he did not start uploading on until July 2019. The focus of the channel was to move his demonetised content to the vault channel while being able to provide the main channel with demonetisation. He briefly uploaded some videos dating from 2014 to 2016 until he stopped uploading on the channel in August. He admitted in his Cards Against Humanity Revisited series that despite him deleting the videos and moving them to his "vault" channel that it did absolutely nothing.

In July 2018, he branched away from being included in videos with VanossGaming, he admitted that he just mainly wanted to be known as a friend of Evan, and to focus on his own ventures in his career.

In November 2019, he won the Content Creator of the Year award.

In mid-June 2020, he was at the centre of a sexual harassment/paedophilia scandal which resulted in him stepping away from YouTube for a month-and-a-half. He admitted that his mental health took a turn for the worst, and chose to return to his hometown of Derry, Northern Ireland to reside with his family. However, on August 12th 2020, he returned to YouTube with an introduction to his latest video explaining why he left and how he promised to change and take a journey through mental health issues.

Mini is known to be committed to fundraising and philanthropic works, he is a member of The Thirst Project and in May 2018 he hosted two 12 hour livestreams and reportedly raised $150,000 for the organisation. In November 2018, as part of his work with the project, he travelled to Swaziland to help build wells that his community raised funds for.

In October 2019, he was named as a Board Member by The Thirst Project and was additionally awarded with the Cameron Boyce Pioneering Spirit award.

In November 2017, the City of Derry Rugby Football Club renamed their stadium the "Craig Thompson Stadium" after he sponsored the club, the sponsorship is reportedly supposed to last for 10 years. He was known to the stadium as he had played their many times during his youth.

In late June 2020, Craig was called out by two people by the names of Halley and Ash who made accusations to Craig about him manipulating the two women while he was in his twenties while the pair was underage. later his former girlfriend, SuniDey described their relationship as toxic and manipulative, she also addressed false rumours that Craig had raped her - Following these allegations, Craig took an indefinite leave from YouTube and tweeted out admitting his behaviour and that he would seek therapy - Ty Widdas, his editor, later removed his mention of Craig in his bio on Twitter, most likely signalling that he would no longer be editing his videos, but this remains unconfirmed as of this time . [2]

Many former fans of Craig or people who dislike Craig have referred to him as Pablo, an alter-ego paedophiliac character that Craig voiced in 2014. Additionally, he has deleted comments from his most recent video regarding the drama and blocking people on Twitter who do not respect his privacy or wishes.

During his break he moved back to his old studio at his parents home in Derry. As of August 13th, he has returned to making content, and has lost over 30000 subscribers while he was away. 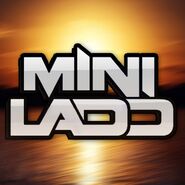 Mini Ladd's old logo used from 2014 until 2017.
Community content is available under CC-BY-SA unless otherwise noted.