Vanoss And Friends Wiki
Register
Don't have an account?
Sign In
Advertisement
in: YouTubers, The Main Crew

Average at video games, great at having fun!

Brock Barrus, also known as Moo (formally "Moo Snuckel") is a comedic YouTuber known for his exotic laugh and pun jokes. He is respected for his bubbly personality and rare use of profanity.

Moo Snuckel's gaming content focuses on mainstream games like Call of Duty, Garry's Mod,Grand Theft Auto V, and Uno where he plays with his friends.

Moo has a wife named Lauren, with whom he sometimes plays with and answers some of his QnA. The pair has a daughter, who sometimes sneaks into his office and play with him.

This section is in need of major improvement. Please help improve this article by editing it.

“Are you serious?! WHY DID YOU DO THAT?! I HATE YOU!!!”
—Moo to Terroriser after being pushed off, Golf It.

“"OH MY GOSH, I'M GONNA FORCE CHOKE SOMEONE!"”
—Moo after he misses a trick shot and falls off, Golf It.

“[laughing hard] I just sat there... and watched you climb up all those stairs...!”
—Moo to Delirious, after killing Delirious once he climbs a large flight of stairs, GTA V.

“Why does it keep--”
—Moo, hitting his desk for the first time after missing the hole, Golf It.

Terroriser – “Bottom of description with you, sir.”
Moo – “Like it matters on your channel!”
―Moo, after not helping Vanoss and Terroriser push them to the hole, Golf It.

“Maybe because his pants are on fire!”
—Moo, after Terroriser calls an emergency meeting suspecting Fourzer0seven to be an Impostor and the latter's smoke alarm goes off in his house, Among Us 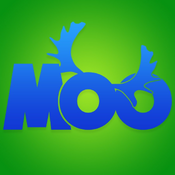