Average at video games, great at having fun!

Brock Barrus, also known as Moo (formally "Moo Snuckel") is a comedic YouTuber known for his exotic laugh and pun jokes. He is respected for his bubbly personality and rare use of profanity.

Moo Snuckel's gaming content focuses on mainstream games like Call of Duty, Garry's Mod,Grand Theft Auto V, and Uno where he plays with his friends.

“Are you serious?! WHY DID YOU DO THAT?! I HATE YOU!!!”
—Moo to Terroriser after being pushed off, Golf It.

"OH MY GOSH, I'M GONNA FORCE CHOKE SOMEONE!" ---Moo after he misses a trick shot and falls off, Golf It.

“[laughing hard] I just sat there... and watched you climb up all those stairs...!”
—Moo to Delirious, after killing Delirious once he climbs a large flight of stairs, GTA V.

“Why does it keep--”
—Moo, hitting his desk for the first time after missing the hole, Golf It.

Terroriser – “Bottom of description with you, sir.”
Moo – “Like it matters on your channel!”
―Moo, after not helping Vanoss and Terroriser push them to the hole, Golf It. 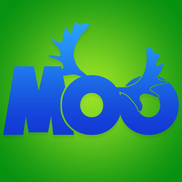 Moo's second and current logo
Add a photo to this gallery

Retrieved from "https://vaf.fandom.com/wiki/Moo_Snuckel?oldid=22865"
Community content is available under CC-BY-SA unless otherwise noted.